Are there anythings better in sports than rivalries?  There are Red Sox vs. Yankees, Bears vs. Packers, Cubs vs. Cardinals, Blackhawks vs. Red Wings, Duke vs. North Carolina, Inter Milan vs. AC Milan and many others.  It’s what gets our adrenaline rushing and emotions flaring. When we think of baseball we automatically think New York Yankees, unless you are from Boston.  I think it’s fair to put the St. Louis Cardinals into that mindset.  As a lifelong Cubs fan, I’ve seen many Cardinals teams consistently compete.  It’s hard to hate an organization that does everything right, even if they acquired future Hall of Famer Lou Brock from the Loveable Losers.  I have nothing but respect for this organization.  They always have depth in their minor league organization, and know the right acquisitions to make at the trade deadline.  When one player goes down or declines, the next is ready to step up and produce. This has to be a great feeling for Cardinals fans.  It’s something I’ve never experienced with any Chicago sports organizations.  The past few weeks we’ve seen my previews and rankings of the NL Central.  I’d like to bring you my final preview and top of the NL Central: The St. Louis Cardinals. 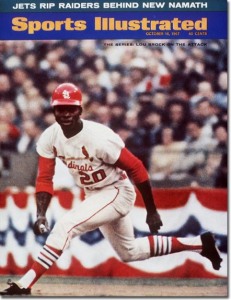 The Cardinals may not have the fantasy studs of years past, but they have players that can play huge roles in your fantasy team’s success.  Matt Holliday is the definition of underrated consistency.  You know you will get 25+ home runs and nearly 100 RBI.  He’s definitely past his mid-.300 average, but .270-.280 is something I’d take any day.  I’d love to have him on my fantasy roster.  Then, there’s Yadier Molina.  Most young catchers take a few seasons before they learn the defensive part of catching. Molina is the exception. He was defensively sound from the start and started producing offensively a few years into his career. The catcher position isn’t very deep, but I would never complain having Yadier Molina. He’s as consistent as it gets from the catching position. The most intriguing acquisition is Jason Heyward. He was supposed to be the next great power hitter for the Atlanta Braves.  I’d say, it’s safe to say he has been short of reaching expectations.  However, given his new scenery in St. Louis, there’s no reason he can’t consistently hit 20+ home runs and drive in his fair share of RBI.  We must not forget he’s only 25. One thing that is mind boggling to me is the fact he’s 6’5″ 245lbs. With that size one would expect nothing but power. He’s shown glimpses, but hasn’t been able to consistently hit the long ball.  It proves, once again, size isn’t everything.

St. Louis’ lineup is full of guys that can drive in runs and score runs. Stealing bases isn’t the name of their game, but Kolten Wong will get his fair share.  I look for Matt Holliday, Matt Adams and Jason Heyward to produce the long balls, but Yadier Molina knows how to get the timely hits needed to drive runners in or get on base. This organization believes in playing the game the right way.  I note this to attribute to the ongoing success they’ve had year after year.  They are full of selfless players that will lay down a bunt if it means winning a game.  Mike Matheny was the perfect manager to replace Tony La Russa.  He knows what it takes to win ball games and former catchers usually have the most success as managers. With the same returning cast from 2014 and the addition of Jason Heyward, the Cardinals will once again be atop of the NL Central and make a deep playoff push for a 12th World Series Championship. 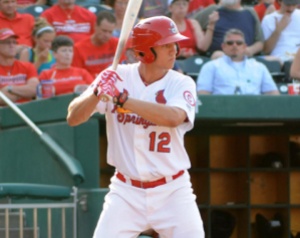 Stephen Piscotty: As I’ve mentioned time after time, the Cardinals have the depth in their minor league organization. Piscotty looks to be headed for a career that produces a .300 average.  He’s a corner outfielder, but if needed he could play centerfield if Jon Jay doesn’t produce.  Another option could be moving Heyward to center and placing Piscotty in right. With the potential for 10-20 home runs and 30-40 doubles, Piscotty is the perfect prospect to be called up by St. Louis. He doesn’t strikeout often and can sneak in a few steals.

Adam Wainwright looks to anchor the Cardinals starting rotation.  The big right hander has had a remarkable career and looks poised to continue his trend.  One thing to keep an eye on is his abdominal strain.  It kept him out for the first few weeks of Spring Training.  He says he’s felt good, but one would hope it doesn’t come back during the season.  Reports suggest it was a belt high strain.  The interesting part is that this is usually where strains occur prior to be diagnosed with a sports hernia.  Let’s hope it’s nothing more than a normal strain.  Again, monitor this if you own him on your fantasy team.  After Wainwright, Lance Lynn, John Lackey and Michael Wacha look to lock down the rotation.  Michael Wacha is a guy I own in many fantasy leagues.  I look for him to have a breakout season.  Along with Gerrit Cole, Wacha is ready to be the next young stud on the pitching mound.  Their fifth starter is a toss up for me.  Carlos Martinez seemed to be the likely candidate to fill the fifth spot, but Marco Gonzales has had a remarkable Spring.  I give the edge to Gonzales and believe Martinez will be lights out from the bullpen.

Marco Gonzales: If you’re like Corey Roberts and myself, you drool over left-handed pitching.  They seem pretty consistent, and if they’re good, they’re very good.  Gonzalez is your prototypical command over power lefty.  He throws his fastball, changeup and curve for strikes.  He’s had a history of nibbling at the corners, but with the confidence he’s built this Spring Training, I believe he knows he has the it factor.  He can also swing the bat.  The fact he plays in the National League and can hit gives his manager an edge over many other organizations.  At times, he can be left in to square a bunt, rather than waste a pinch hitter. When it  comes to the chess match that baseball is, this is huge.

Along with Pittsburgh, the Cardinals have a good bullpen.  The loss of Pat Neshek is big, but they have the pieces that are ready to step up and produce. Flamethrower Trevor Rosenthal will once again shutdown the ninth inning, but he has to cut down on his walks. He throws very hard, but the more free passes he allows, the more pressure he puts on himself. So far he’s managed just one walk this spring in seven innings pitched.  He’s destined for 40+ saves.

The Cardinals are my pick to win the NL Central.  It’s not going to be a cake walk with the likes of Pittsburgh continuing to rise and the emergence of the young, mighty Chicago Cubs. If the Cardinals stay healthy they should be at the top come September and make a deep push in the playoffs.

I'm a former collegiate and semi-pro baseball player. I underwent successful Tommy John Surgery in 2008, and can give a wide-range of tips on the surgery and rehabilitation. Chicago sports are the love of my life [Cubs, Bears, Blackhawks, Bulls] as well as Serie A football [Forza Rossoneri!]. 2018 will be my fourth writing for Major League Fantasy Sports, and each season gets better than the previous. 2016 was very emotional for Cubs fans alike. After 108 years, they finally scaled the mountaintop! "Baseball been berry, berry good to me!"

About 4 months ago from Corey Roberts's Twitter via WordPress.com