Billy Beane must yearn to play fantasy baseball.  He runs the A’s like a fantasy team.  Ben Zobrist, Billy Butler, Ike Davis, Brett Lawrie and Marcus Semien are all new to a lineup that was third in the AL in runs scored last season.  The A’s lineup is Billy Bean’s re-draft league.  This is his own personal game of musical chairs.  That being said, Mr. Beane does seem to know what he is doing as the A’s won 88 games and made the playoffs last season.  Are all of these moves a step forward, or backward for Billy’s A’s?

Who will supply the power for Oakland in 2015?

Over drafted – Ben Zobrist –  Zobrist has been wildly consistent and reliable throughout his career.  The 2B/SS eligibility he carries in most leagues is sweet also.  The problem is he is still being drafted like a 20/20 guy.  He has not had more than 12 HRs or 11 SBs in the last two seasons, topped 75 RBI in the past three, or batted over .275 in the last five.  He will be a perfect fit in Oakland and have a fine season, but where I see him going in drafts there is a lot more production still sitting on the board.

Bust – Ike Davis – Ike will not cost you much at the draft table, but whatever you pay for this guy will be too much.  This guy has not been a good baseball player since the beginning of 2011 when he was hitting .302 and playing Gold Glove caliber defense.  Sure, he got hot the second half of 2012 and hit 32 HRs but, that was with a .227 BA and a .308 OBP.  Since then, he has not come close to the 2011 hitter or the 2012 power production.  Sometimes, you have to write people off.  He is being called a sleeper and I have no clue why.  Could it be the pitcher friendly ballpark he will now call home?  Or, the fact that he claims he is finally over a rare disease (valley fever) he somehow contracted during spring training of 2013?

Sleeper – Brett Lawrie – A guy with 2B/3B eligibility and 20 HR potential that you can get in the last rounds of a draft is the definition of a sleeper.  Or in Lawrie’s case, a “post hype sleeper”.  Sure, his BA, OBP and SLG have all dropped each of his four years in the big leagues, but he has had some injuries and is only 25.  His 12 HR last season in 70 games would look awesome extrapolated over an entire season as a pick in the final rounds of your draft.  This has all the makings of the Billy Beane Midas Touch. 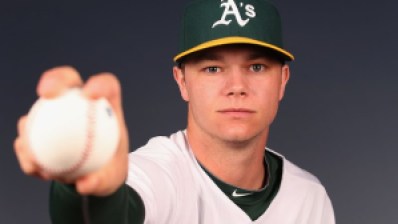 Breakout – Sonny Gray –  In his first full Big League season Gray threw 218 innings posting 183 Ks with a 3.08 ERA.  He just churned out quality start after quality start.  He may never have the gaudy strikeout numbers, but at only 25, should improve and challenge the magical K per inning plateau.  The thing that shows how good he can be is the mere 15 HRs he gave up in his first full season vs MLB hitters.

Value Pick – Scott Kazmir – Kaz has been around forever now and many may be scared off by his seemingly guaranteed injuries.  Coming off an All-Star appearance and back to back seasons in which he started at least 29 games, he could be a great draft pick to fill in your rotation.  The 3.35 ERA and 1.16 look great at his ADP of 196.  It is possible he benefited from playing home games in Oakland last season, but for those who draft him this season, you will be happy to know that is where he will pitch his home games again this season.

Sleeper – Drew Pomeranz – The 5th overall pick in the 2010 draft was the center piece in the trade that sent the mythological Ubaldo Jiminez from Colorado to Cleveland.  Unfortunately, Pomeranz would have to learn to pitch in the Big Leagues while calling Coors Field home. Finally, Billy Beane stole him away from Coors, allowing him to pitch like a normal human being for the 2014 season.  Low and behold, a 2.35 ERA and a 1.12 WHIP.  Although it was only 69 innings and 10 starts, the former top prospect showed the tremendous breaking ball he posseses…the one that does not break in the thin Rocky Mountain atmosphere.  Using all his talents and pitches in a pitcher friendly environment, he could be another example of that Billy Beane Midas Touch.

Closer – Sean Doolittle – Doolittle was one of the top closers in 2014 once he took the job over and never looked back. Unfortunately, he will begin the year on the DL, allowing another top bullpen arm a chance to close.

Setup – Tyler Clippard – Year in and year out, Clippard is one of the best setup men in the game.  He has never gotten a chance to close, but will to begin the 2015 season.

Tying the bullpen together…There is speculation that if Clippard gets off to a great start, he could run away with the job, and that would make A’s manager Bob Melvin happy by allowing him to have a right handed closer and keep his lefty (Doolittle) to face lefties.  It would make Billy Beane happy by paying less in Doolittle’s arbitration years, as saves cost more money.  Either way, both of these pitchers need to be owned.  They are both superior bullpen talents.

Losing Yoenis Cespedes and Josh Donaldson takes the axniety out of pitching against the Oakland lineup.  I have a sneaky suspicion that the offense will still be almost as good this season.  My reasoning is partly blind faith in Billy Beane.  This team will live and/or die with its pitching though.  With young arms like Gray and Pomeranz ready to step up, the A’s should easily be .500 or better again.  AL West Prediction – 88-74, 3rd place

And this was when these guys were small….

@coreylogan500 Tweets “What is your fantasy outlook for Brian Dozier this season?”

Remember to send questions to [twitter-follow screen_name=’theCiccone’] or josephciccone1033@gmail.com to be featured in future columns.

About 4 months ago from Corey Roberts's Twitter via WordPress.com