“Off the Matt” I Don’t Always Draft Quarterbacks Who Have Not Started a Game Since Mid 2013…But When I Do, It’s Sam Bradford.

Another offseason has produced another crop of quarterbacks heading for what they hope are greener pastures.  While most of these quarterbacks are headed for a quarterback competition, the duo that was traded have clear paths to a starting job.

I made it clear how I felt about Bradford in an article that rolled out in early May.  Here is a excerpt from the May piece that gets my mouth watering when thinking about his potential 2015 stat line.

Mark Sanchez is a guy who is easy to pick on, but when he took over the controls of Chip Kelly’s offensive machine he became a reliable fantasy quarterback.  In 4-of-9 games running the show he posted yardage totals of 332, 346, 307 and 374.  He also was able to throw multiple touchdown passes in six of those games.

No disrespect to Mark Sanchez, but if he was able to put up these numbers, one has to believe that Bradford is capable as well.  Even though he has been in the league since 2010, there is some mystery surrounding Bradford.  One thing that is not a mystery is that whoever is running the show in Chip Kelly’s offense will put up numbers and be worthy of a starting quarterback slot in any fantasy league.

This is about to get weird, but say it with me…

Here is some more proof.  In the eight games he started here is how he stacked up against the rest of the league:

This was not a cake schedule as five of the eight games came against playoff teams.  Sure, there were some ugly games mixed in, but saying that he cracked the top 7 fantasy quarterbacks in half of his starts is worth something.

I am not here to sell you on Mark Sanchez.  Actually, it is the exact opposite.  My point is that if Mark Sanchez can do it, then Bradford, who is more talented in every facet of the game, can certainly do it…better.

No one would be foolish enough to debate arm talent when comparing Sanchez and Bradford.  Eagle pass catchers are already raving about Bradford’s arm.  Players are impressed with his arm strength, touch, and timing.  As you will see in the chart below, Bradford’s best attribute might be his ability to get the ball out quick and accurately.

The chart above is a representation of his 2013 pass attempts in the seven games that he played.  The green represents an accurate pass, while the red was considered inaccurate.

The accuracy up to 15 yards certainly looks impressive.  Of the 224 passes he threw that went less than 15 yards, only 20 of those throws were considered inaccurate.  In other words, Bradford was considered accurate on these type of passes 91% of the time.

When the ball traveled over 15 yards his accuracy went down hill in a hurry.  Of the 38 passes he threw over 15 yards, he was inaccurate 17 times, which basically meant it was a coin flip if the pass would be accurate anytime it traveled more than 15 yards.  Throwing an accurate pass is only half of the battle.  Actually completing the pass is a different story.  On throws that were 20+ yards Bradford tallied six completions on 21 attempts, including two interceptions.

There is much more that goes into having a successful intermediate/deep passing game than just a quarterback who can make the throws.  A run game, consistent offensive line play, and receivers who can get open all play into it as well.  A guy like Aaron Rodgers has all three of this working in his benefit.  However, Sam Bradford has arguably never had any of those variables working in his favor. 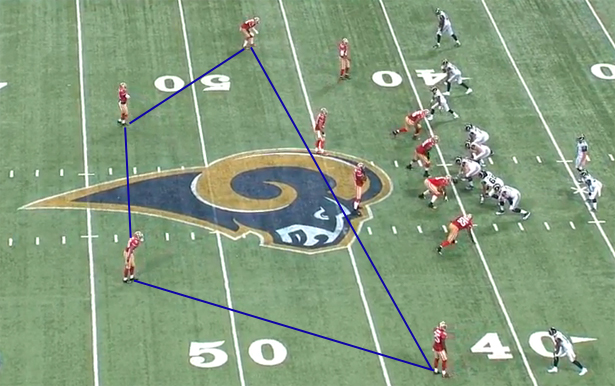 Good luck completing a pass down the field verse this look.  When the defense has no respect for the run game, and can get pressure with just four rushers it is going to be almost impossible to stretch the ball down the field.  The receivers are playing four verse six and when the defensive line is able to apply quick pressure, that is a match up the secondary will win every time.

When thinking about the lack of run game, absence of quality offensive line play, and no serious weapons outside, it becomes quite clear why Bradford struggled in general, but especially completing passes down field.

Sam Bradford is certainly not getting any iron man awards.  Is he injury-prone, or just unlucky?  No one can say for sure.  My hope is that he can put his injury history behind him and play a full season. DRAFT TIP: If you take Bradford, grab Mark Sanchez in the last round as the insurance policy on Bradford.  As the numbers show above, he would be a serviceable replacement.

I guess the last topic worth covering is decision making.  Chip Kelly always talks about how quick decisions need to be made when operating his high-speed, high-tech offense.

Will Bradford be able to display the same quick wit that enabled Sanchez to have success in Chip Kelly’s offense?…..

…. I think Bradford will do just fine.

Best of the Rest

No thanks.  While the Rams are one of the most feared teams in the league on the defensive side of the ball, the offense has some catching up to do.  While they have young talent at the receiver position and also drafted the most talented running back coming out of college, this offense is still a few years from clicking.

If you are considering drafting any of those above names, please send me an email as we have spots available in our fantasy league.

(Click the BLUE link below to listen to the show)

A/S/L...like the old school AOL instant messenger days... 31/M/PA Elementary Physical Education by day, chasing around my 1 and 2 year old boys by night. I started playing fantasy football when I was 9 years old (94'). My older brother let me be a co-owner on his team. We had one of those giant C-Band satellite dishes and had heard that there was a way to get every football game through a new package called "Sunday Ticket." My first memory was watching Terry Allen run around for the Vikings and I have been hooked ever since. I don't know what the world record is for most consecutive Sundays watching a minimum of seven hours of football, but I have to be on my way to achieving it.

About a year ago from Corey Roberts's Twitter via WordPress.com