“The Wizard of Goz” First Base Rankings 2018; The Bottom Half 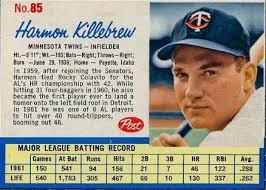 Tighter wound balls, band box ballparks, changes in hitters’ launch angles, and bad pitching – add ’em all together and a record 6,105 homers (regular season only) were hit in 2017. At first base alone there were nineteen players that hit 25 dingers or more. Moral of the story is that there is a lot of depth here and therefore no reason to panic when getting your starting 1B. The rankings list will be presented in two parts – in a twelve team league those listed below have “starter” potential but ,more than likely, are best slotted at CORNER, UTILITY or RESERVE. Baseball Card tribute at top of article is of an all-time great corner (1B & 3B) who had one of the best, albeit politically incorrect, nicknames of all time …………KILLER

33. C.J Cron (LAA)– smoked the ball last summer after returning from AAA. Still not old at 28, if you believe he finally “got it” AND that Pujols is washed up, grab him to bolster bench.

32. Logan Morrison (Free Agent)– calling what he did last year a career year – 38 HRS/85 RBI/ .868 OPS -would be like calling Einstein a tad smart. Valid only if he finds the right home.

31. Eric Thames (MIL)– popular sleeper pick last year for owners hoping for a speed /power combo. Bopped 31 homers but struck out a ton and, even on a team that led the AL in SB’s, only had a pitiful two net steals. The Brewer’s addition of Yelich and Cain guarantees a lower spot in the batting order. Bench support only.

30. Ryan McMahon (COL)- opportunity knocks for this sweet swinging lefty. Versatile athlete that also can play 2B or 3B. Even near the bottom of the Rocks lineup, he could pay huge dividends at little or no cost.

29. Mitch Moreland (BOS)– not profound but promises to be an under the radar cheapo pick. Fenway is not the best spot for a lefty but  road games in Toronto, Baltimore and Yankee Stadium  give him 27 chances to pad the home run column.

28. Brandon Belt (SF)– injury risk combined with below average power for his position don’t bode well. The good news is his ability to play outfield combined with the addition of Longo and McCutcheon may give him a chance to return to  20-80-.275 normalcy.

27. Albert Pujols (LAA)– precipitous plummet to 23 homers and a wretched .286 OBA could mark the end for the big guy. Not worth more than a $2 flyer considering the beef in this market.

26. Chris Davis (BAL)- still slated to bat cleanup in spite of last year’s K fest. Still has plus power but very streaky. Therefore he is only recommended in head-to-head format if you’ve got the stones.

24. Ryon Healy (SEA)– pure power, peak age metric and the fact that he qualifies at both corner spots makes him tempting.  But, an atrocious eye (almost 7:1 K to walk ratio) is a worry. Is he mediocre at best,  or a guy with a new lease on life in Seattle that can be a middle of the lineup 30+ homer crusher? Good $2 pick in auction or late round selection in a snake draft despite recent development (surgery to remove bone spur in hand).

23. Yuri Gurriel (HOU) -34 year old rookie played an integral part for the world champion Astros . Full of swagger and can hit the ball a mile, could be better with a year under his belt.

22. Justin Bour (MIA)- only an injury blocked a breakout season for the big lefty. Marlins dumpster fire will cost him RBI but will still pound plenty of homers at a discounted price.

21. Joey Gallo (TEX) – ONLY 24 years old he’s on the same trajectory as Chris Davis – minor league phenom who strikes out, even in the AGE OF WHIFF, way to much. Then again 50 homers is possible in Arlington. Dual eligibility in some leagues is an added bonus.

20. Matt Carpenter (STL) – best years are past him.  But batting at top of order helps. Still capable of putting up decent overall numbers, and can be had for a song . If walks and/or OBP counts move him up a notch or two.

19.Greg Bird (NYY)– post hype sleeper who could hit 30 bombs in the band box in the Bronx at a discount. Gets incredible respect despite a limited track record. Far from a sure thing, I’d still take a chance based on the potential of the new Murderers Row.

18. Matt Olsen (OAK)- only 23 years old this lefty slugger could be the real deal. Lots of opportunity on a lousy team will give him tons of playing time. In spite of playing home games at the Oakland Cavern, he should plant 30 bombs easily. Don’t overpay just in case of the dreaded SOPHOMORE SLUMP.

17.Trey Mancini (BAL) – if only the Birds could unload Chris Davis and his ridiculous $23 million per salary. Nonetheless, the Italian Stallion will be in the lineup somewhere and should put up solid numbers at a fraction of the cost. (NOTE: primary position last year was OF)

16. Ian Desmond (COL)– based on the body of work and current age (31) give him a mulligan for last year’s debacle. Could end up in the outfield. Way too much swing and miss to be counted on entirely. But he still has 20/20 potential. Keep an eye on him in spring training. If healthy, he will be a steal as a mid-round pick.

15. Carlos Santana (PHI)– ordinarily the move to a new league could be worrisome but not for this switch hitting workhorse. Great move by the Phillies to bring in this epitome of a professional hitter who will bat in the top half of a potent lineup. Expect 28-82 and .260 with a strong OBP (career mark of .365).

Thanks for reading the piece.

Major League Fantasy Baseball Radio Show: Join Corey D Roberts, and Kyle Amore live on Thursday February 15th, 2018 from 8-9:30pm EST for episode #98 of Major League Fantasy Baseball Radio. We are a live broadcast that will take callers at 323-870-4395. Press 1 to speak with the host. We will the latest information in the world of fantasy baseball.

Our guest this week is Kevin Bzdek. Kevin is a writer with Major League Fantasy Sports and part of the editing staff. Kevin’s articles publish every Friday morning at 7am.

The link above is to listen on our blogtalk radio website. You can listen to the show directly on the homepage of majorleaguefantasysports.com without the annoying popups and obnoxious ads that are on the blogtalk website. It will be playing automatically during the show time.

More in 1st Base