Anyone armed with a decent magazine or cheat sheet can pick the beginnings (five rounds) of a good team but it is the middle/ the late/ the reserves where winning teams are borne.  Fantasy baseball -injuries aside – is simply about margins. Grab a 10th rounder that garners 5th round value , that’s a win. Spend a 5th rounder on a closer that ends up a 22nd rounder, that’s a quick trip to the proctologist. I think you get it, the more “values” the better.

#176 1B-Josh Bell (PITT) – granted that 1st base in 2018 is the Horn of Plenty but a 15th round pick for this thumper? HELLO!!! Granted, last years power surge was unexpected and has caused RTC (regression theory conspiracy) . Logically, the “bias” is driven by supporting cast (lousy) and home locale (not ideal). But let’s look at the positives for selecting Big Bell- firstly, the power is probably real FROM BOTH SIDES OF THE PLATE with a better than average walk to K rate. Secondly, batting average is likely to climb towards .270 at least based on minor league success and respectable contact rate in the SHOW.  Thirdly, and of course debatable Big Fish Small Pond advantage whereas he’s ingrained as THE MAN (aka batting 3rd or 4th). Last, and perhaps most important is the critical factor of ROSTER CONSTRUCTION- fill in half a pitching staff , the majority of your starting batting lineup and end up with a solid player that will move the needle towards a fantasy championship. Think about it. 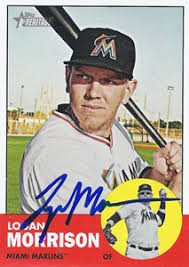 #286 1B- Logan Morrison (MINN)– the Twins are officially no longer a joke and picking up LoMo on the sly- great move. No one, and I mean no one, expects this guy to repeat last years heroics 38/85/.868 ALL WERE CAREER HIGHS by a landslide. Unlike the Rays last year, Minny made plenty of positive off season moves and is smelling playoff contention. Don’t be misled though; the addition of this lefty lumberjack is not a panacea – it’s a complimentary piece.  Park differential is negligible but the fact remains that he’s been platooned a lot over the years (2,173 at bats vs. Righty’s versus 780 vs. lefties). His average for all intents and purposes is the same (and not good at .244) but HR rate (every 24 at bats vs. righties and ever 42 vs. lefties) and OPS (.787 vs. righties and .697 vs. lefties) make full time duty improbable. That being said – and realistically knocking off 100 at bats -Morrison could still pop 20 and ,with that lineup, drive in 75. Common sense $1/ end of draft special ESPECIALLY IN HEAD-TO-HEAD DAILY LEAGUES, which if they haven’t already are becoming most popular, and bench his butt against tougher southpaws.

#309 1B- Brandon Belt (SF) – despite no bonus points for MLB’s longest neck this guy has value in larger leagues especially. Never a prototypical slugger (high of 18 last year) this guy is a good filler especially in leagues that feature OBP (lifetime mark of .358). On the surface last year was cruddy- average down to  a career low .243 probably due to the injury bug (played only 108 games). The half full end of it was that Belt had more extra base hits (48) than singles (44). He also whacked an HR a career high once every 21 at bats! At age 30 it’s doubtful that he’ll “go off” but with the addition of Longo and Mccutcheon he could surprise. This guy is a sturdy last pick before the bench round kind of guy- just do the right thing and pick a couple project picks (youngsters maybe without a current gig but with upside) as insurance.

#118- 3B/OF Nick Castellanos (DET) – moving to OF this year only increases the appeal. Just turned 26 years old , a lanky masher, in the heart of the Tigers lineup – all positives. Took a big leap last year with the only issue being a relatively poor eye (15% walk rate). Led league in hard hit balls (31.1%) and as a result logged an eye popping 72 extra base hits. Absolutely positively undervalued at present ADP- putting him in the OF smart move but if he’s your CIF -wow and if he’s your 3B- NO PROBLEMO.

#311- 3B Matt Chapman (OAK) – in a shrewd league people will know this guy but otherwise what a dynamite last-pick-of-the-draft-call-me-a-guru-if -you -wish call. This is more like a GEM in need of polishing rather than a no -doubt -about- it, blinding to the human eye scenario. The positive is that this former first round draft pick played a half season and belted 14 HRs , and played superlative defense. The power is, no doubt, legit (80 homers in 320 minor league games) but the K rate is outlandish. History shows that a .244 batting average and .327 OBP in the minors do not bode well at the next level. That being said the guy is young (25 soon) and despite the warts could slug .500 and have an .800 OPS. This is a penny stock with growth potential. Large league- no brainer call. Standard league he’s still worth a roster spot.

#503 3B Christian Arroyo (TB)– Rip Van Winkle time. absolutely without value UNLESS YOU’RE IN A 50 ROUND/ NO PICKUPS LEAGUE or 16 or more teams with large rosters. Now that I’ve dissed this guy lets’ talk about the positives. A. plays for the hot mess known as the Tampa Bay Rays. B. was the key guy in the trade that sent Longoria to the left coast, C. is young- not even 23 yet, D. was a high average/solid run producer in the minors , E. can play 2B,SS or 3B. Morale of the story is that this is a Florida kid who also was a former first round draft pick who may be in the right place at the right time, even if it’s with one of baseball’s worst franchises in MLB.

That’s it for now- next week six more potential gems to ponder.

Our guest this week is Kevin Bzdek. Kevin is a writer with Major League Fantasy Sports and part of the editing staff. Kevin’s articles publish every Friday morning at 7am.

More in 1st Base