The parallel to picking a catcher in Fantasy Baseball is picking a tight end in Fantasy Football. In both cases, owners are torn: pick a tier 1 guy or just fill the spot as an afterthought. I lean towards the right thinking that my vast knowledge (in years/leagues played) will point me to middle-of-the-rung types. This year I am in ten leagues; four I care about (i.e stakes) and six that were done for research purposes/fodder as an MLFS scribe. Today I will recount the backstops I selected.

Mike Zunino (SEA) – probably my happiest result based on : A. 30 second time clock , B. against the supposed top-level peers at MLFS, C. second to last catcher picked (GOOD VALUE @ 23rd round). I suppose there are a lot of people figure last year was a fluke. NOT ME.

In the co-workers/buddies league I probably could have waited until the 24th round but secured the Z-man in the 16th since I had a lengthy list of end game non-catchers left.

J.T Realmuto (MIA) – Stupid and Stupider. Case a., for some reason I deployed the let’s not pick a dreg strategy. I know better: first his MLB team is a hot mess and second the guy doesn’t shine in any stat except maybe playing time. Of course, in hindsight, the scar cuts deeper since he’s got a bad back NOW! And forget about the thought that he’ll help you in SBs. Really, he averaged 10 the past two years–hardly a difference maker. Wretched mistake in the 10th round.

Case b., was a rushed plan gone bad. The true nut (i.e addict) out there can relate to this sad story. You get in a league and realize you can’t do it (pick live) but being the fool that you are, you decide to compose an autodraft list and hope for the best. So, there I went hurried and without logic piling players in the queue, trying to have at least an adequate glut of players at each position sprinkled in. That was the smart part. The dumb part was not taking 10-15 minutes and re-ordering the list. So the draft started at [8:30]PM- and around [9:15]PM I was able to access a computer to check out the, sure-to-be fiasco. I had the 12th (of 12) pick- no problem with that – Votto and Kris Bryant!! The hiccups began shortly. My team had one starting pitcher (Lamet) and one closer (Allen) who were my keepers.  THIS WAS THE ENTIRE PITCHING STAFF when I “surfaced” in round 10.  And to make matters worse, there was that SONOFABITCHIN BASTID in round 7, J.T REALMEATHED. I almost threw up.   Overall, a good recovery I think but WTF.

Jonathan Lucroy (OAK)- drafted as a free agent. Sometimes you roll the dice and win, often you don’t. Given my druthers, Oakland wouldn’t have been ideal but it’s a young, possibly up-and-coming team that could use this savvy vet. And let’s not forget: unless last year’s demise was the proverbial fall off the cliff, this guy can rake like few catchers in the BIGS especially at an 18th round cost. 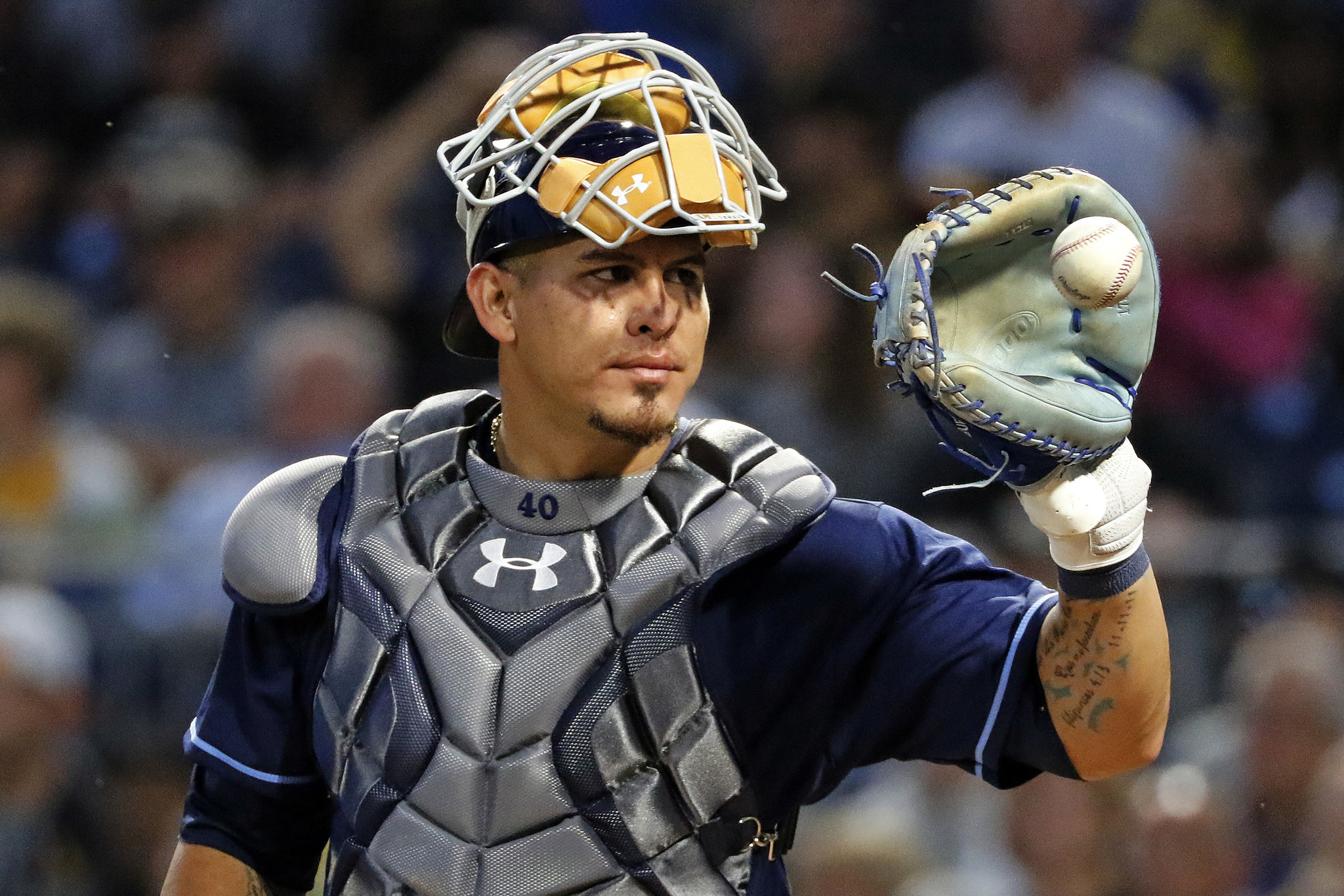 Wilson Ramos (TB)- this is a story of the big fish in the small (almost drained) pond. Arguably a top fiver CATCHER in the 16th round– hell yeah. There’s always the possibility that he could get traded or, banish the thought, get hurt again. Regardless, could contend as my MVCatcher in 2018.

Evan Gattis (HOU)- one of the toughest things to do as a fantasy owner- regardless of sport- is to “forgive” a player. My brother, Meggy was an extreme case of banned for life if he spent a goodly amount on a player and the guy sucked, regardless of circumstance, he’d get the sentence. I’m more of a one year suspension kind of guy. Regardless, as recounted in my very first article for MLFS, “Catchers- the good and the bad in 2017”, I listed Gattis as a chokin’ bum. In spite of that big decline from ’16, this year, for reasoning that is iffy as far as I’m concerned, he’s ranked quite high. Like I may have stubbornly inferred, rankings should be a guide only when it comes to picking a team. So for a 16th round pick– I’ll consider that a solid C+ only because I was big enough not to blackball the Big Salami.

Yadi Molina (STL)- as stated above I partook in ten drafts – nine on-line and one live. I cut my teeth in auction drafts but over the years play almost exclusively in snake drafts. That being said, this league was the ultimate learn the player pool exercise: a 20 teamer X 30 players marathon= 600 players . To further complicate matters the

salary cap was not the rotisserie baseball standard of $260, instead it was doubled to $520. Real simple right? Just double your perceived value and move on. Close enough. Under that scenario, I didn’t buy a player until nominee #37 (Rivero $35). My last player was nominee #439 (Devenski $1). In between I think I did a good job including player nominee #261 when I grabbed Yadi for 20 bucks. Earlier I had grabbed nominee #165 Alex Avila (ARZ) for $9. Very happy with the pairing of one of THE BEST with my catcher SUPER SLEEPER. Was $29 too much? Time will tell….

Wellington Castillo (CHI)- targeting players is a tricky situation. First, if you go “all in” on a player chances are you will overpay sooner or later. Second, you may pass over a good deal by being stubborn and last, if the guy goes down, spits the bit or whatever, you will have the domino effect of not having to just replace ONE PLAYER BUT TWO, OR FOUR, OR A HALF DOZEN! All that being said, I adopted this under-many-radars, portly dude as my safe haven back-of-the-baseball-card backstop. He ended up on two teams of mine including the one I care the most about (17th round) . Many fantasy “players” don’t even know that he’s now on the Chisox (and could approach 25 BOMBS with increased PT). For the record I stole my buddy in the other league in round 25.

Commandment 1: THOU SHALL HAVE A STRATEGY- doesn’t have to be complicated or written in stone but go along with the game plan (JG)

Commandment 2: THOU SHALL KNOW THE PLAYER POOL- know the depth of each position pool AND ACT ACCORDINGLY (AM)

Commandment 3: THOU SHALL STICK TO PRICING STRUCTURE- during auction drafts have a price in mind for each player AND STICK TO IT! (BR)

Commandment 4: THOU SHALL KNOW YOUR LEAGUES SETTINGS- leagues have quirks. Example: if your league has HOLDS, value these guys correctly (AM)

Commandment 5: THOU SHALL DRAFT AND STASH ROOKIES – in particular the guys that got sent to the minors that will get the call (E.G: Willie Calhoun & Austin Hays) (BR)

Commandment 6: THOU SHALL BE UBER PREPARED- during in-person drafts BRING A COMPREHENSIVE DRAFT BOARD. Don’t be the PeaBrain rifling through a magazine!! (JG)

Commandment 7: THOU SHALL NOT FILL YOUR ROTATION IMMEDIATELY- two reasons= you’re batting will suffer ,and you may miss out on the sleeper SP you gotta have (BR)

Commandment 8: THOU SHALL NOT OVERREACH FOR UNPROVEN TALENT- shiny toys are nice to have just price them accordingly (AM)

Commandment 9: THOU SHALL NOT BE A HOMER (OR A HATER)- if you’re a Yankee fan still at least consider a Bosox player. And don’t overload your team with “your team” (JG)

Commandment 10: THOU SHALL NOT PICK A PLAYER BASED ON NAME RECOGNITION- know when players are on the downside. Back of the baseball card stats can be misleading (BR)

Commandment 11: THOU SHALL NOT OVERLOOK APRIL INJURED PLAYERS- grab a guy at 50% off and reap the benefits later (E.G: Alex Reyes & Justin Turner)

Commandment 12: THOU SHALL NOT BE INTOXICATED- it’s okay if you want to indulge afterwards, after all for many of us DRAFT DAY is akin to a cherished HOLIDAY!!

For the in-depth unveiling of the above “rules” or if you are interested in 2018 REBOUNDERS and RETURNERS TO EARTH check out the replay of SHOW #109 which is co-hosted by Boston Brian Roche and myself. Andy Musugha was our special guest.

As always your questions/ feedback  is greatly appreciated- jgozzi@gmail.com

SO LONG FOR NOW