Fantasy championships are rarely won on Draft Day especially in redraft leagues. The key components of trading and waiver wire pickups are integral in shaping a team into the hunt and beyond. There is no magic formula to this but bear in mind that depending on your league there could be maximum pickups rules, bidding on players, and limited bench space.

Owners go to the waiver wire for three major reasons: 1. a key player gets hurt, 2. a player that was overlooked draft day “emerges” or 3. you’re looking for bench/bye week support. The last and lowdown reason is for the league sniveler who uses the free agent pool to block other owners in hopes of gaffing them in a trade. That being said there are additional factors such as whom to cut? and if you are in a FAAB system, how much to bid? Thought provoking stuff.

The intent of this column will be to recount the turn of events the weekend past (not counting Monday’s tilts) and to offer a myriad of options both obvious and not so much. Remember Alvin Kamara?  This week don’t expect a big score along the lines of James Conner or Adrian Peterson but rest assured that the following players, although not great, can be good enough to help your team win in the weeks to come. NOTE: all percentages are Fantrax (which tends to be higher than Yahoo/ESPN et cetera)

Ryan Fitzpatrick, Buccaneers (11%) – chasing stats is never recommended but when you have a stable such as the one in Tampa it’s worth a shot. Known mostly as a game manager the Beard has had many good games that have been fantasy “worthy”. Although it’s possible, supplanting Famous Jameis Winston as the starter all season- not a chance.

Joe Flacco, Ravens (31%)- supporting cast improved and will get better if Hurst plays and is the real deal. Pretty much a matchup play but could surprise especially if Baltimore gets some momentum. 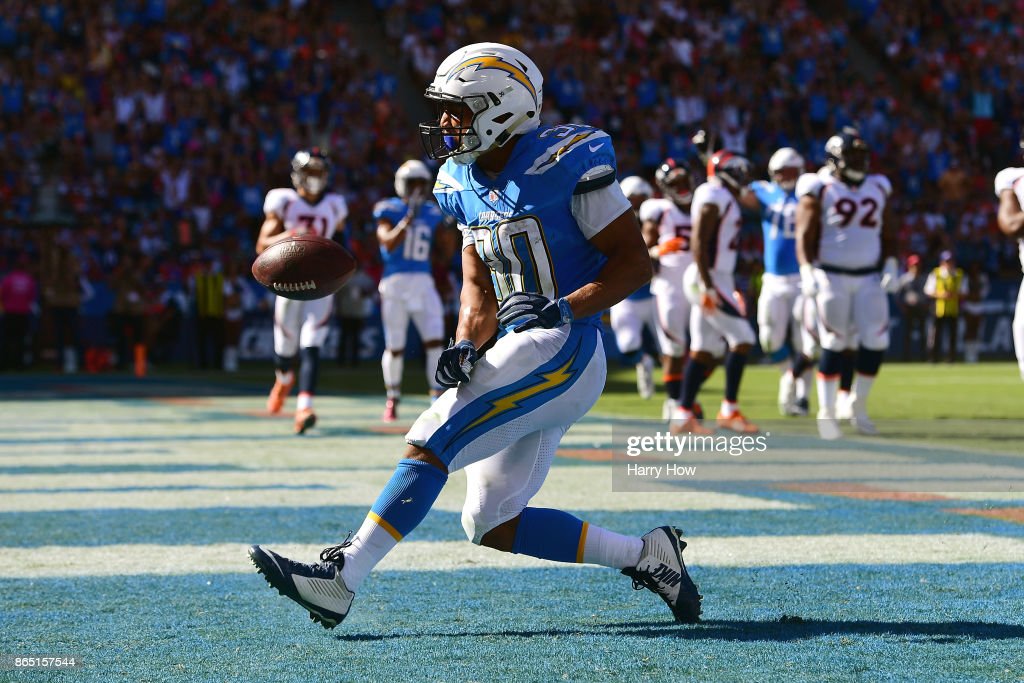 Austin Ekeler, Chargers (62%)- smurf-like guy who played well as a rookie last year (5.5 YPCarry, 10.3 YPCatch, and 539 total yards). Stronger than he looks and possibly the best third down pass catcher nobody knows about. Will he take Gordon’s job? Hell, no. But can he could have some outstanding games such as the stellar 126 total yards and a score in week 1. Hell, yes.

James White, Patriots (80%)- Dion Lewis is gone, Jeremy Hill shredded a knee and Burkhead has been dinged up. All White does is, without the wow factor, make big plays and plow into the end zone. The Pats are all about the hot hand and the weekly script.  Therefore there is risk involved but if you can live with, on average five receptions and an off-chance of a big rushing day, this is a good player.

T.J Yeldon, Jaguars (47%)- definitely third on this list regardless of the health of Leonard Fournette’s massive hamstring. Played at Bama. Now in his fourth year there have been some solid moments rushing and receiving. Playing on the Jags- a run first, pass second team gives him some reps. All in all a $1 FAAB guy especially if  that blazing fast, moose of a teammate is really hurt and not just dinged up.

Dante Pettis, 49ers (23%)- ordinarily I stay very clear of rookie wide receivers basically because they DO NOT PLAY. And when they do play, it’s often a calamity of wrong routes, dropped passes and overall ineptitude. But this guy could be worth a look based on the tools (size, speed, hands) , a strong training camp and the fact that Marquise Goodwin (quadriceps) will be sidelined until further notice. Oh, and Jimmy G. needs a downfield target to go along with the “under” tosses to the highly underated George Kittle. Yesterday was a good debut- 2 grabs for 61 yards and a score against the nasty Vikings defense. If you look at free agency as a pool , he’s worth a medium-sized dive.

Brandon Marshall, Seahawks (25%)- this was a thrill a minute player in his prime that openly talked about being bipolar. Last year surely looked like the end- speed gone- hands of stone- attitude awful. But here we are in 2018.  Can this big guy (6’5″ and at least 232 pounds) who is 34 years old and with the absurdly great numbers still get it done? Yesterday was a nice start 3/46 /1. On a team that will be without Doug Baldwin (knee) expect a lot of looks from Russell Wilson and possibly even good production! Much safer than Pettis and miles more interesting if you can cope with all the drama, good and bad, that are part of the Marshall “Plan”.

John Brown, Ravens (53%)- never really materialized as the deep threat he was hyped up to be in the Desert. In Baltimore under the sage leadership of Joe Flacco he is the number two guy behind Crabtree which could easily translate to the more than adequate stats in the vicinity of 50-725-6.

Two top tight ends went down in week 1, Delanie Walker (dislocated ankle) is gone for the year and Greg Olsen (foot) is out indefinitely. Neither will be adequately replaced by this cast of characters, but here goes.

Austin Seferian-Jenkins, Jaguars (71%)- I mentioned him as an overlooked guy a few weeks ago and nothing changed since. He’s still on a team dying for a red zone threat and he’s very large, and he unofficially leads the league in TD’s called back. Yesterday was the same old/same old mediocre production 3/25 as well as a TD called back! He’s not good but he will be decent enough to fill the stat sheet by seasons end.

O.J Howard, Buccaneers (77%)- even discounting the backyard shootout numbers Fitzy put on the Saints the Tampa Bay offense will move the ball. Peyton Barber will a useful dual threat and the wideout stable is borderline nasty. Mike Evans is top ten material on any list, Desean Jackson, regardless of age, is a field stretcher extraordinaire and they even have a young star who belongs front and center as a WIDEOUT TARGET -CHRIS GODWIN (59%). That leaves Cameron Brate and the bigger upside choice of the GOOD , and very athletic, O.J!

So Long For Now,