Early season baseball can drive fans nuts. The weather is often iffy, and the caliber of play erratic. Being from the Northeast, it’s been quite an experience watching Bosox and Skankee fans stress out. It’s a long season and more than likely, each will be playoff contenders. As far as fantasy owners, it can be an equally stressful time when your team is inundated with injuries and/or underachieving duds. Some owners will be ready, even this early, to pull the ripcord . Chances are the “stars” are safe but the middle rounders and especially the “hunches” are on ice thinner than a dime. This week I’m gonna roll out a four pack of players , two to buy and two to sell.

Last year’s handyman special banged 20 homers, 77 RBI, .254 AVG and 10 SB. Not great numbers really but compared to past results, a banner season. Not to say he was a “target” in 12 team mixed but definitely a valid player who qualified at at least three and maybe four positions, a nice piece.  On a new and more solid team than the Rangers, and at 26 years old, there was reason to believe that there was some upside in ’19. And then the season started.

Thus far, The “Jerck” is a fixture at 2B which is probably his best position based on last years defensive ratings. But the stick is sound asleep. It’s way early to foresee if the A’s will rise back to last year’s standard. With that lousy pitching staff that’ll be some feat. Matt Olsen’s busted hand definitely is a downer but he’ll be back. “The Other Jesus” Luzardo is nursing a sore wing, if he is half as good as he looked last year and this spring that’ll be a kick start. But the point here is not about 2019 Oakland A’s hopes, but about the owner that is really wondering if the pick of a player that had exactly one decent year and has a lifetime batting average of .235 put him/her in the (stupid) club. The crazy idea of acquiring this guy is based on a deep discount- I’m not talking one bum for another bum- that’s silly. I’m talking about a multi-player trade with this guy as a toss in or a FAAB/ free agent acquisition for those impatient enough to give this skilled player the heave-ho. 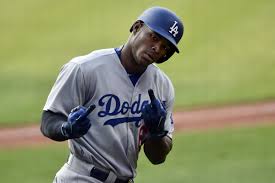 This guy could be baseball’s bi-polar poster child. When he’s on, it’s dance fever happiness and when he’s not, be ready for broken bats and some seriously mean facial expressions. A lot of people doubted that Puig can be happy in boring old Cincinnati on, let’s face it, a losing ballclub. Those were the non-buyers.

And then there was the legion that figured in Cincy- away from the L.A scene there would be the maturation to the 30 ding dong and 20 swipe club. Early on, this is not the case, and especially after being suspended for fighting NOW is the time to make a bid on this hulk. Don’t expect an MVP kind of turnaround but he will get acclimated and start launching HR’s soon enough. Look at his current fantasy team and make an reasonable offer (look for a 10-15% discount).

32 starts. That appears to be the Holy Grail in today’s age. Today’s mentality is that if you can get through six or seven innings on average you’ll be among the few in the 200 inning club. Today, I roll out for you two starters that were had in a typical league for a few bucks, a late pick or even a junk pile pickup. I picked six teams and both guys are on two teams. They’ve been fantastic but sure as nightfall they have zero chance to keep up the magic. Am I shopping either? Not really, but if someone makes me a strong offer, toodle-oo.

Breakouts come in various degrees- for White Can a 9-13 record, 4.39 ERA , WHIP 1,16 and 159 K’s were reasons to celebrate. Those stats may or may not have been worth a bid depending on the league, in part because the Tigers suck. If the first few starts are any indication last year was just a, pardon the pun, a start. In the era of 5 by 5 category league this guy COULD be a difference maker in the K department. I owned this guy last year and there were many good starts (14) and quite a few shellackings. He was an average pitcher then but can he be better this year? I think so, but don’t expect the second coming of the best lefty in Tigers history, Mickey Lolich. But the thing is someone out there might think so. For the record the opponents faced this year were Toronto (A), New York (A) and Cleveland (H). All three have been spotty thus far.

Hence, unless you are really seriously strapped for starting pitching, be elated with your early good fortune and swap him for all you can get immediately.

In A.L only or 16 team leagues he was drafted. A few nuts like me took him in a 12 teamer despite the fact that in the last three years his innings pitched was pathetic (77, 31, 14) due to arm injuries and a rocket off the coconut. But I heard that he was humming the ball well and on a less than spectacular team had a spot in the rotation. He’s 32 years old now and his lifetime stats 3.87 ERA, 1.18 WHIP  and 8.1 K/9 offer hope that the old Shoe from 2016 when he threw a career high 160 innings could be a factor. Early on, the Jay’s have been rancid and will remain rancid until the reinforcements arrive but Shoebacca has been incredible. I’d love to see this guy persevere and be an All Star this year but the back of the baseball card and the long haul of the season say otherwise. Dipping into the numbers of the early success is important, opponents were Detroit (H), Baltimore (H) and Boston (R). The first two have arguably the worst lineups in the league and the third, the Red Sox are playing sub-par. In closing, it’s been a miraculous start for Shoemaker but don’t think this is even mildly sustainable. SELL.

Major League Fantasy Baseball Radio Show: Join host Brian Roach, Jr, and Cole Freel live on Sunday April 7th, 2019 from 8pm-9:30pm EST for episode #150 of Major League Fantasy Baseball Radio. We are a live broadcast that will take callers at 323-870-4395. Press 1 to speak with the host. You can listen live on blogtalk, majorleaguefantasysports.com, or download the podcast on I-Tunes or any Android podcast app. We will discuss spot starters for the coming week, plus a weekend update, and look ahead to next week.

Our guest this week is Bryan Luhrs. Bryan has been a writer with majorleaguefantasysports.com for 6 years, and is the owner of Real Deal Dynasty Sports.

“Gehlbach on the Farm” – Already Time to Sell?
“65 Mustangs” Pick Your Spots – Spot Starting and Streaming guide – Week #3 – Stick With What Works, Right?