HI/LO is all about immediate gratification. Like every other season there have been surprises. Below you will see a lineup composed of, in many cases overachievers, some of which will have more trade value than others. More importantly, the season is at minimum 20% over and it’s time to consider selling HI unless you really, really think a player flirting in the fluke zone “got it” in 2019. NOTE: All stats through May 8.

Last year was actually pretty good  (4.19 ERA/ 1.24 WHIP) but this year he is in full blastoff mode and shows no signs of slowing down (11 Ks last outing against the Cubs). There are a few “issues” worth noting however: A) he’s on the Marlins (bad team/lousy bullpen), and  B) the most innings he’s ever pitched happened in 2013 (135 innings). Off the charts great start so far especially considering that he was, in most cases, a waiver wire wonder. Doesn’t matter, someone in your league will believe that Smitty will be the missing piece to their staff. 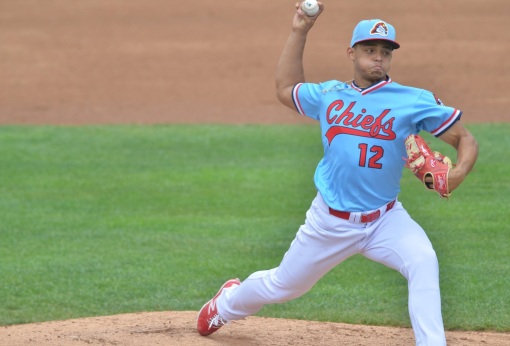 Throws : Lives in the 100 MPH zone, fastballs and sliders! Only in his 3rd year of pro ball and blossomed last year, LOWEST BARREL RATE in MLB last year (77.1 IP/3.59 ERA/ 1.34 WHIP). The addition of A.Miller scared some people away. Even if you trust the huge control improvement TRADE BUT TAKE ‘EM DEEP.

Take a close look at the hitter’s numbers, very similar; then take a look at 2018 ADP. As an owner don’t even try to predict will it last, instead think let the bidding begin!

Last year (10 HR 50 RBI) was a mess. This year’s start puts him into contention for best catcher overall in the game. If you’re offense is stacked W-CON has gotta go for a solid pitcher and an average catcher.

Absolutely mauling the ball.  Huntsky got it going a bit last year 11HR /34 RBI/ .673OPS. This year opportunity arose and he actually looks like the #1 draft pick he once was. We’ll see…meanwhile he’s available for a fair-to-middling gouging.

Lowe’s forty game debut (6-25-.774 OPS) last year impressed and the Rays struck quickly with a 6 year/$24 million dollar contract.  Needs to flop high K:BB ratio to be a star but will do a lot of damage in the meantime.

Great draft day pick by you to fill out your roster- keep him as a cog unless the price is special. Just bear in mind the unsustainable BABIP (see table)  will affect stats sooner than later (NOTE: .300 BABIP is average, anything above that is “lucky” and below “unlucky”)

On a pace for career homers and RBI- it’s possible – he’s 26 years old! The average is so-so but the 15 BB/ 15 SO start is noteworthy. In this lineup and prone to hot streaks sell when he’s EN FUEGO.

It was just two years ago that Elvis, at 28 years old, tilted the SS landscape with a 20 / 88 / .808 OPS and 25 steals. Prior to that breakout it was all about speed , and then, the power developed. Hot starts don’t define seasons but they sure do help the raging fires known as: HI/LO Shortstop for Sale Sweepstakes….

The worst teams often unveil the biggest surprises. Competition is high and jobs are up for grabs and frankly, crap happens. In Baltimore, Austin Hays tore apart spring training and then is sent down for financial reasons and then gets hurt. Cedric Mullins looked like a comer at the end of last year and got sent back to Norfolk after a 6 hits in 22 games mess. Adam Jones was let go. That left Trey Mancini who actually replicates a big league hitter (but not an OF)  and Dwight Smith Jr.. Nothing special probably but could entice owners that are hyper-focused on at bats.

Good, but never a great player due to poor .318 OBP. Probably was aided by the friendly confines of Harbor Yard but still can hit the ball a long way. Could be considered on a mission due to being released and overlooked this spring. Probably not a needle shifter but would suffice as a Monday and Thursday lineup plug in. And of course the passel of games to be played at Coors.

Not the Say Hey kid, Heyward has disappointed for years. He looks good in a uniform and is great in the field but at bat- NFG up until now. No reason that a guy that big (6’5″ and 240 lbs) has that little power. He’ll be 30 this summer and has produced one season when he bashed more than 20 homers (27 for Atlanta in  2012). Since then a decent amount of steals but power numbers are relatively lousy. Ability to make contact however has gotten better over the years.

Don’t let his looks deceive you- this guy can mash. New approach with lowering of hands and uppercut has gotten results. Playing time is a worry with a team full of DH’s (E5/ Jay Bruce) but this guy is really fun to watch. Obviously only a larger league/roster type who can surprise especially in the DFS world.

This article was all about the fact that 35 games of brilliance doesn’t really mean a whole lot EXCEPT TO OWNERS OF FLOUNDERING TEAMS. Some of these players will persevere, but most will plummet to back-of-the-baseball-card normalcy.

Major League Fantasy Baseball Radio Show: Join host Cole Freel, and Kyle Amore live on Thursday May 9th, 2019 from 7:30-9pm EST for episode #158 of Major League Fantasy Baseball Radio. We are a live broadcast that will take callers at 323-870-4395. Press 1 to speak with the host. You can listen live on blogtalk, majorleaguefantasysports.com, or download the podcast on I-Tunes or any Android podcast app. Cole and Kyle will discuss the latest happenings in the world of MLB and fantasy. They will take a look back on the previous few days and a preview of the coming weekend. Including spot starts, bullpens, offense, and minor league players.

Major League Fantasy Baseball Radio Show: Join host Brian Roach, Jr, and Cole Freel live on Sunday May 12th, 2019 from 8pm-9:30pm EST for episode #159 of Major League Fantasy Baseball Radio. We are a live broadcast that will take callers at 323-870-4395. Press 1 to speak with the host. You can listen live on blogtalk, majorleaguefantasysports.com, or download the podcast on I-Tunes or any Android podcast app. We will discuss spot starters for the coming week, plus a weekend update, and look ahead to next week.

Our guest this week is Kevin Bzdek. Kevin is a writer, editor, league owner, and frequent guest on majorleaguefantasysports.com shows.